The Orthology Benchmarking Service is an automated web-based service to facilitate orthology benchmarking, established and maintained by the Quest for Orthologs community.

Users of the orthology benchmarking web service can take advantage of two main functionalities, accessible from the landing page:

The two basic functionalities of the Orthology Benchmarking service are viewing publicly available results, or testing your own method. Each are available from the links on the landing page.

Several well-established orthology tools have run their methods on a Reference Proteome Set and have already been benchmarked. Their results are publicly available online for comparison. On the homepage (depicted in Figure 1), click on “Public Results” and select which Reference Proteome Set to view from the drop down menu.

On this page, the publicly-available benchmarking results are displayed, organized by type of benchmark. 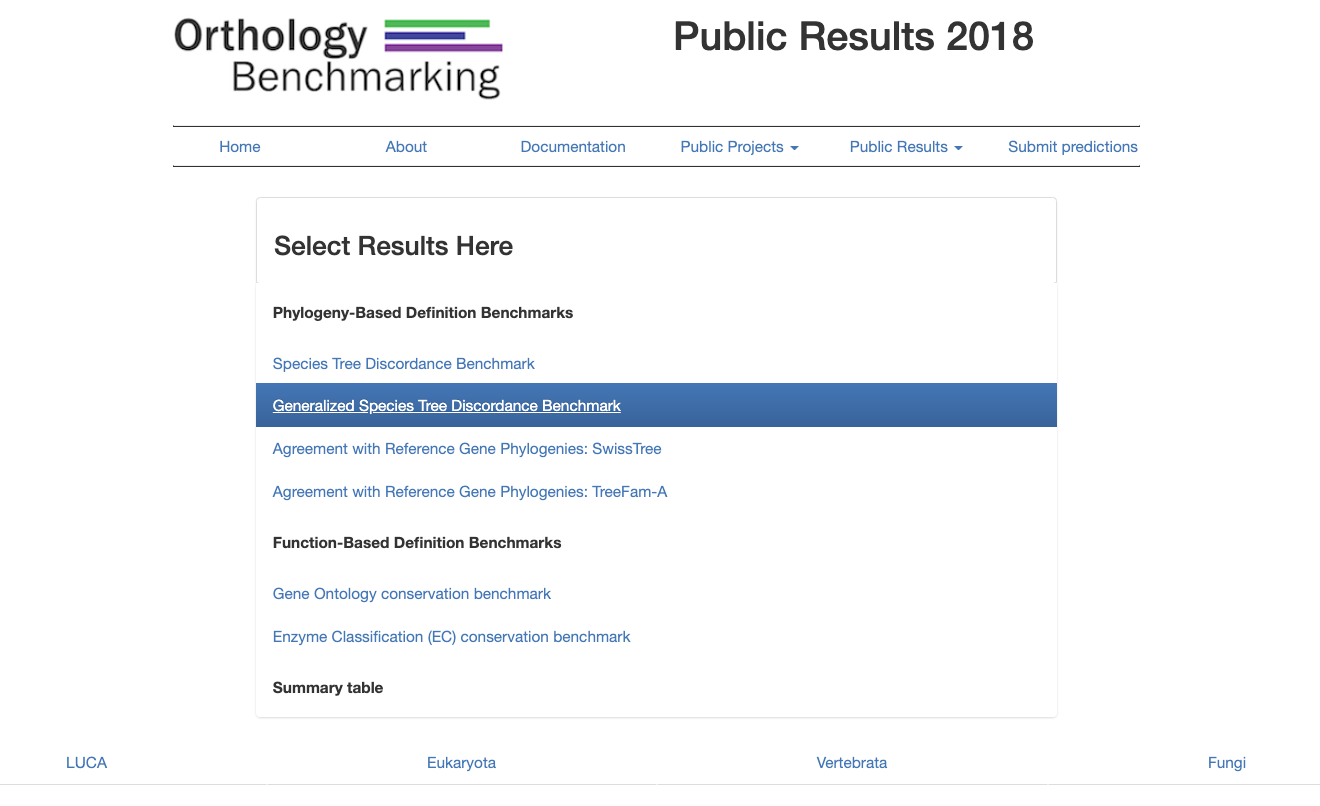 In the Generalized Species Tree Discordance Benchmark example, clicking on the Vertebrate tab displays a plot showing the publicly-available results of the benchmark. 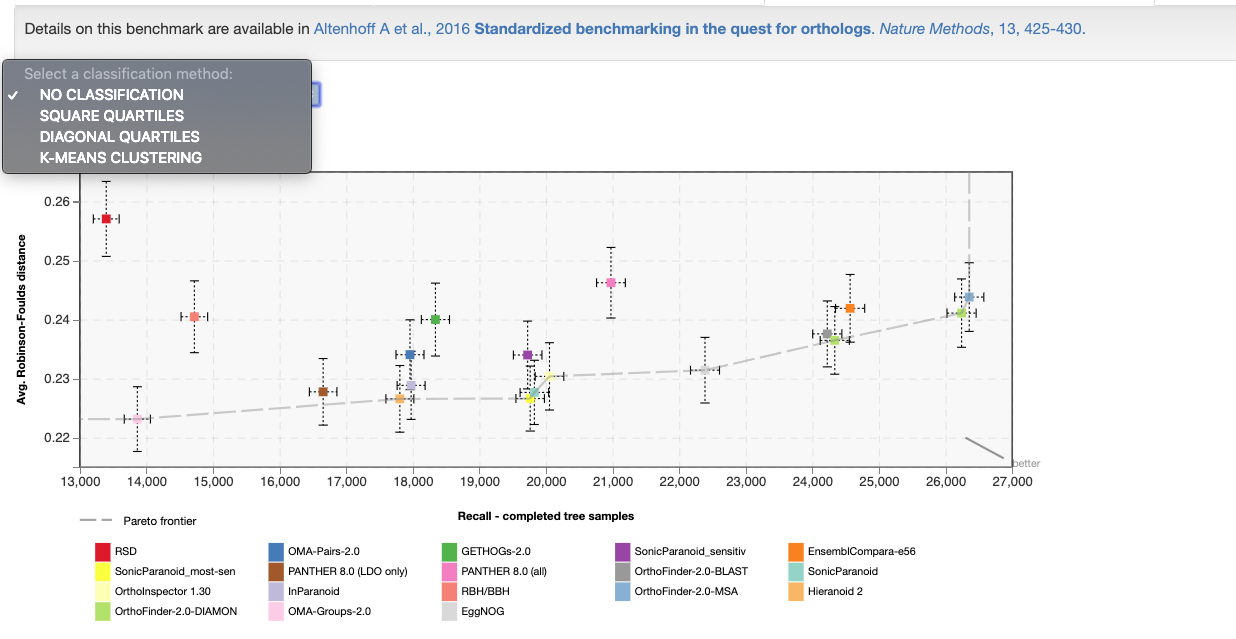 In this example, the recall is the number of completed tree samples, and the precision is the average Robinson-Foulds distance between the inferred gene tree and the species tree.

In all benchmarking result plots, the Precision versus Recall curve is shown. The exact measures depend on the benchmark. For several benchmarks there exists more than one measure per axis, in which case they can be selected with a drop-down menu above the plot showing the result. The different measures are described in the next section. An arrow is displayed which points to the better predictions. The Pareto frontier is shown as a dashed line. Additionally, one can classify the results based on square quartiles, diagonal quartiles, or K-means clustering.

Measures of the benchmarks

Orthology is a property for which it is very difficult to establish a ground truth dataset. We therefore use surrogate measures to assess the quality of predictions.

To assess the recall, we use three different measures in the benchmarks.

Similarly, we assess the precision of a method with the following surrogate measures:

This function is for users who wish to run all the standard benchmarks on their own orthology inferences. One key point is that to avoid mapping issues and biases due to differences in input data, orthology inferences must be made on one of the Quest for Orthologs reference proteome sets. In that way, the results will be directly comparable to other publicly-available methods.

Overview of the workflow

The overall workflow for using the benchmark service is as follows:

In order to compare different orthology prediction methods, a common set of protein sequences must be used. For this purpose, the QfO community, in collaboration with the EBI, has established the Reference Proteome set of proteomes. These proteomes have been selected to cover well-studied model organisms and other organisms of interest for biomedical research and phylogeny.

The reference proteomes are released yearly, in April. The best practice for new methods is to run on the reference proteome dataset of the previous year. For instance, in June 2020, a user will typically perform their analyses on the 2019 dataset. In that way, there will already be some points of comparisons. Established methods are encouraged to submit predictions on the latest dataset.

First, prepare your ortholog predictions to upload in one of the acceptable file formats. Our benchmarks currently assess orthology on the basis of protein pairs. Therefore, we ask our users to upload their prediction in a format from which we can extract pairwise relations in an unambiguous manner. We support:

For both formats, we expect you to submit your predictions in a single file. This file might also be compressed by gzip or bzip2. In that case, it needs to have the proper filename extension (.gz or .bz2).

In both formats, use simply the UniProtKB primary accession for your predictions.

Assume your method produces the following gene history for the insulin family: 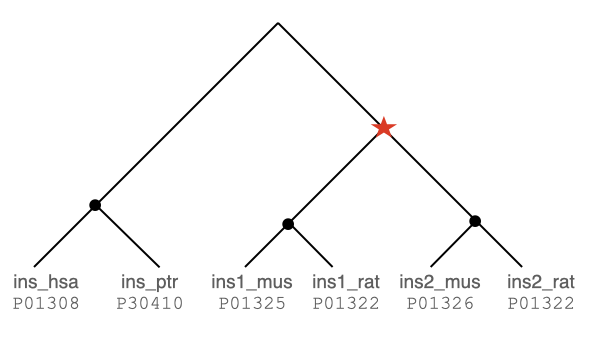 You can now either extract all the pairwise orthologous relations from the tree or encode the reconciled tree in an orthoxml format. You have to do this for all the gene families in a single file.

If you submit a tab-seperate file, your file should look like this:

If you submit a orthoxml formatted file, use the primary accession in the gene's protId attribute:

Next, from the homepage, click on Submit Predictions. This redirects to the QfO page on OpenEBench: 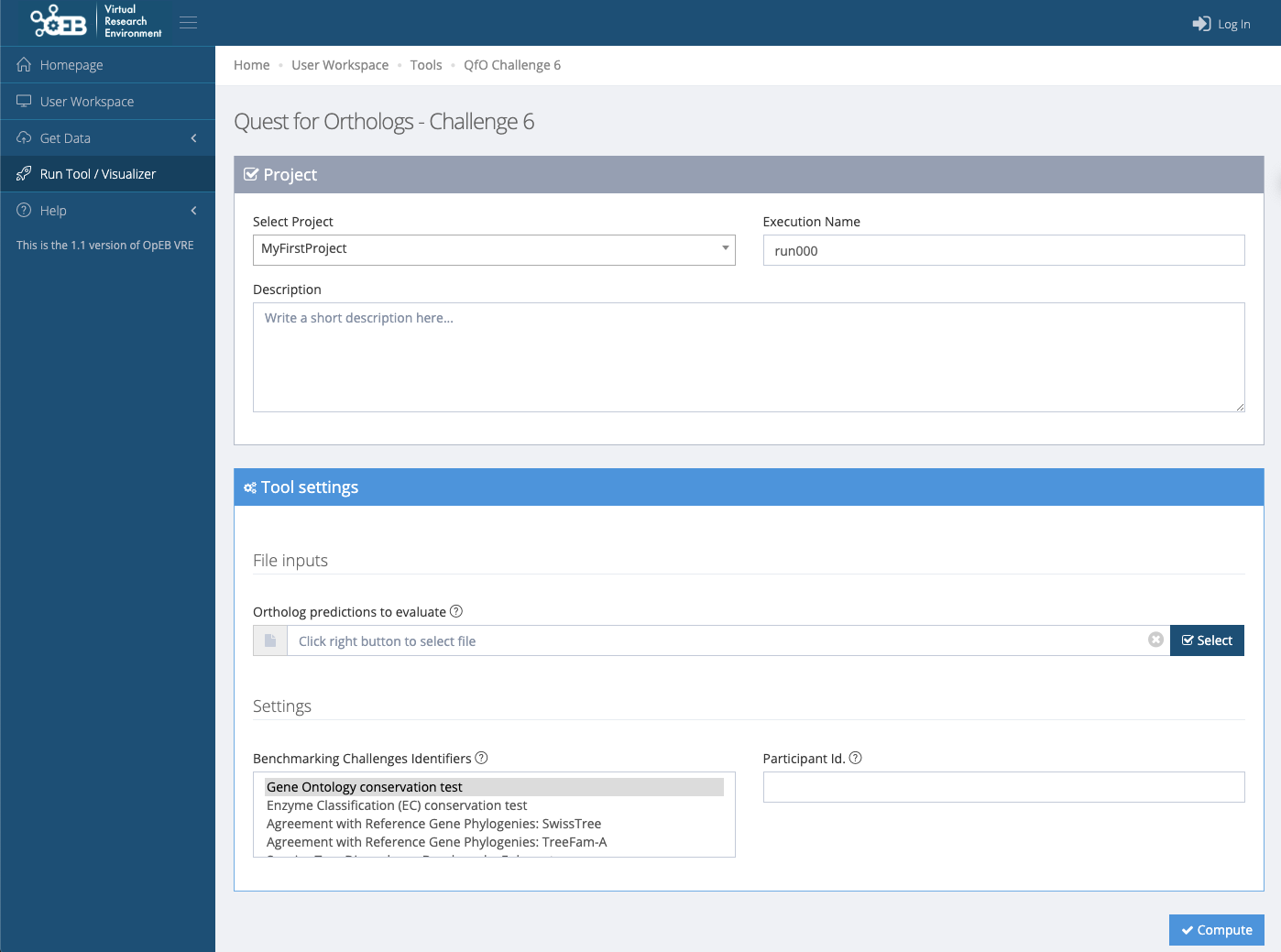 On the OpenEBench page, you are able to upload your orthology predictions. You can either create a user account to save your workspace, or run as a temporary account (limited to 2 Gb and active for one week). If you already have an account, you can select your project; otherwise you can create one.

Upload the ortholog predictions by using the left drop-down menu: Get Data -> Upload Files, and select your files to upload. 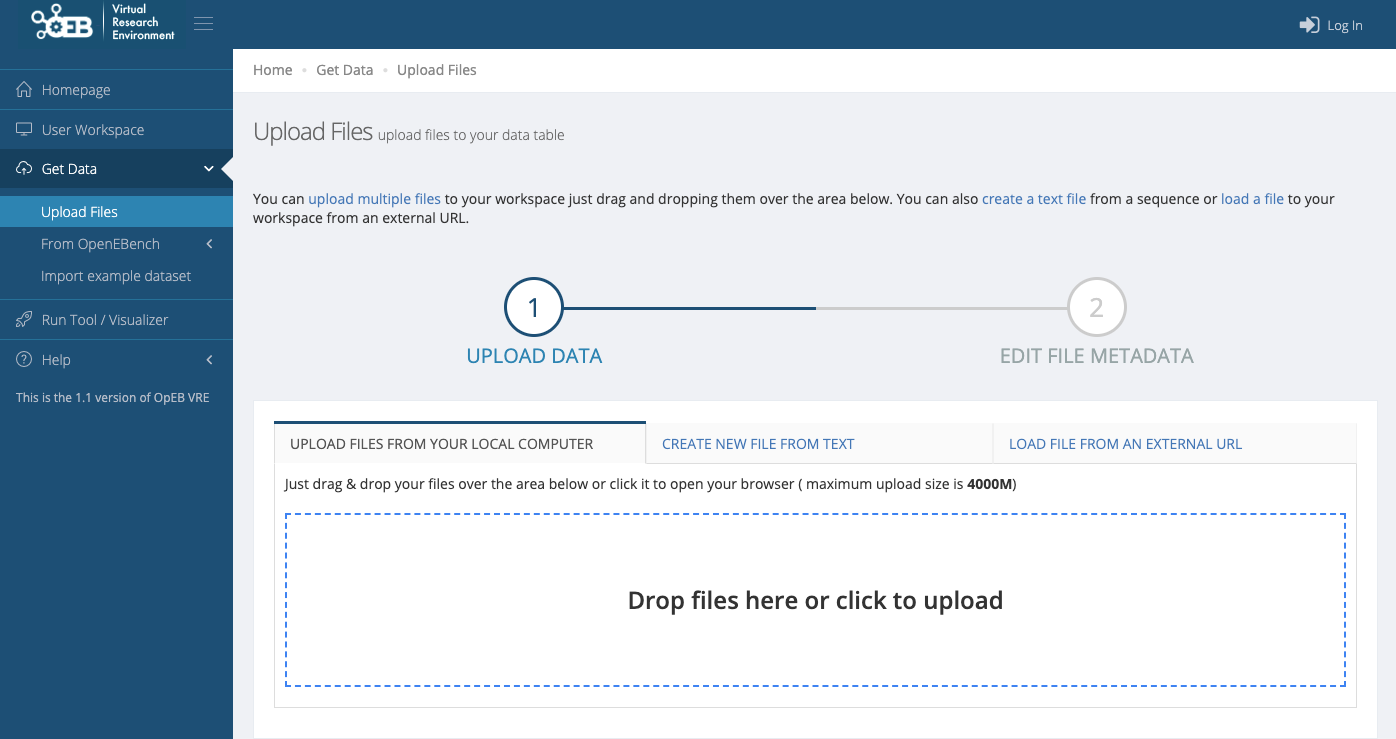 Your ortholog inferences (in one of the acceptable formats, described above) must be loaded into the workspace. This is done by clicking Select, under Tool settings -> File inputs -> Ortholog predictions to evaluate. If this is your first time, you will need to follow the instructions under +Can’t find your data? 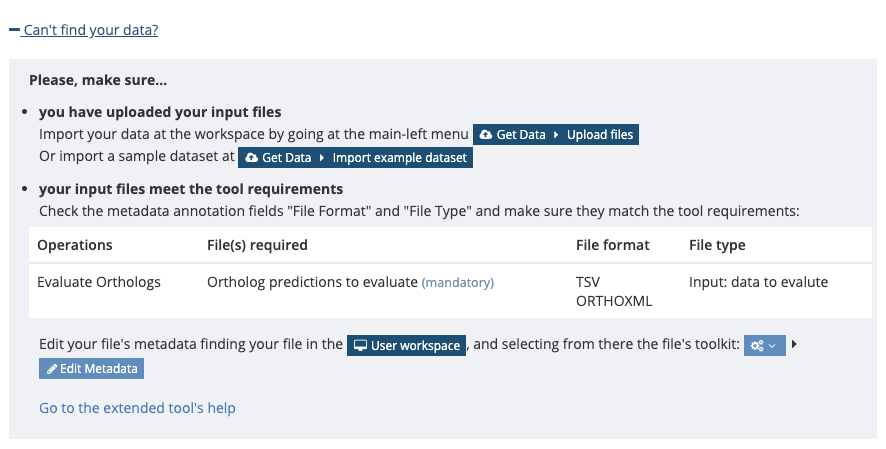 What to do if you can’t find your data. It will need to be uploaded, imported, and in the correct format.

As an example, we import a dataset by choosing Get Data -> Import Example Dataset -> and selecting QfO challenge 6 for the supplied datasets. The data includes the benchmarking metrics computed for two different sets of ortholog pairs:

After uploading the data into your workspace, you can select the file (click on the left-hand side box), then select the QFO Challenge 6 from the Action drop-down menu on the right-hand side.

Selecting the data and choose the QfO challenge in order to select benchmarks.

After selecting your orthology data, you can choose which benchmarks to run underneath Settings -> Benchmarking Challenges Identifiers. In this example we run the Gene Ontology conservation test and the Agreement with Reference Gene Phylogenies: SwissTree only.

Select the particular benchmark to run. You can select more than one benchmark.

After clicking submit, the job will be sent to the OpenEBench servers for computation. The job can be monitored from the Project Workspace, under Last Jobs.

How do my benchmarking results get officially added to the public results?

In order to make your method a public dataset that other methods will compare with, please write an email to openebench-support@bsc.es and provide your email address and Open E-Bench user name. Communicate which set of your benchmarking results to include in the group results. The method / algorithm itself should be described in a publication and accessible to users.